Skip to content
Posted on September 25, 2018 in Success Stories.

Sean and I discussed adoption from the first time we started talking about family planning. We did want to try to have a baby the “old fashioned way” first, but after numerous miscarriages, and failed IVF rounds, we found out, definitively, that we cannot have a child naturally.

From the time we signed up with Everlasting Adoptions until our beautiful baby son, Austin, was born, and we were able to bring him home, took about 16 months. The process was filled with ups and downs. Sean and I were initially placed with a birthmother this past summer. We established a great relationship with the birthparents and were present for the birth. The day we were to take the baby home with us, the birthparents decided to keep the baby. Sean and I were devastated, and were not sure we wanted to proceed with the adoption process. We took some time to heal, and realized in our hearts that we wanted to be parents more than ever. Shortly after we decided to proceed, we were matched with an Angel; Austin’s birthmother.

We would like to give some advice to other prospective adoptive parents. I think the biggest thing we would say, is to proceed with some caution after being placed with a birthmother. Don’t get overly excited (ie; telling the whole world about the pending adoption, decorating the nursery, throwing showers etc….) Wait until you bring the baby home to tell everybody else (other than close friends and family), throw the showers, and decorate the nursery. That way you can do everything with your baby, and it will make the experience just that much more special!

The staff at Everlasting Adoptions – namely Ceal – was an integral part in our adoption journey. Ceal introduced our birthmother to us, and helped guide both sides through the emotional process, offering guidance and advice. Ceal honestly made the adoption possible!!! Ceal became a lifetime friend not only to the birthmother, but to Sean and myself as well!

Out of 10 Stars, I would give Everlasting a 10….we have our beautiful baby boy Austin, because of Everlasting Adoptions!!! 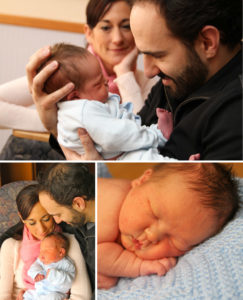