Skip to content
Posted on September 25, 2018 in Success Stories.

When we decided that we would try adoption again I was extremely scared. There was so many things that could happen. I didn’t care how we started our family I just wanted a family. I wanted a baby. I had prayed and prayed that God would allow us to be parents. I knew in my heart that I would but I was scared I wouldn’t be. James always had faith and was amazing throughout the whole thing. I had a hard time with my faith because I didn’t know why…

On November 15, 2013, we signed up with Everlasting adoptions. I had met a friend at my school whom had used them to get connected with their birthmom. They were connected within weeks. Of course, when something like that happens to someone else you think maybe that would happen to you. James and I had our first interview with them and they decided that they would like for us to be a part of their waiting parents. So we started our wait.. I am not a patient person so all of this waiting was hard on me and my attitude. I got more and more bitter ever minute that passed by. James kept me in line and helped me through my craziness. We decided to go on a vacation over New Year’s to start off our New Year with a fresh start. Boy it was a fresh start. In June of 2014 we got “THE CALL”. I was standing by the stairs in our home when I looked down at my phone that said please check your email and call me asap. I ran to the computer to check to see what it said. It said we had a birthmom that was interested in us and wanted to start talking. OMG.. I called James right away. He was so excited. I was too but I was in shock.. I didn’t think it would happen for at least a couple of years. As soon as we read it I called Everlasting back and let them know we were interested. They gave me the Birthmom’s number and we immediately started texting. She was so sweet and was not what I was expecting. I had to tell her that I was pregnant and I was scared that she was going to not want us to be her babies parents. We had just prayed so hard for a baby and now we were possibly going to have two! So, I was at the movies with my school friends and was texting through the movie.. I know not good but I needed to know everything. I told her no matter what we would love her baby more than she could ever know and that even though I was pregnant with a biological child he or she would not be any different in our hearts. He/She would be ours and we would love him or her so much. She decided to pick us and we were so happy. The whole 8 months we talked back and forth via text and my mom and I went up to Arizona to meet her and her family. They were wonderful.

As the date got closer and closer, I became really worried about how it was all going to play out. I was literally giving myself hives because I was so nervous we wouldn’t make it to his birth. I had played every different scenario in my head and we had finally decided that we would drive to AZ and then we would stay in a hotel for however long we would need to, with Jaxon with us. I didn’t think I could be away from Jaxon that long. Then I thought I would see if anyone knew of anyone in AZ that we could stay with. So, I put on Facebook to see if anyone knew of anyone. It just so happened that one of my former students did know of someone. So, I spoke with Larry that night and he told me sure to come on down. He was a pastor from the town we were going to. Then my uncle got us a plane ticket because the new plan was for me to fly there and then James would just meet me there in the car. My mom would keep Jaxon. Everything was just falling into place. It was crazy because every night I was just praying like crazy that God would take this burden from me and help me not to worry about all the stuff and how we were going to get there . Our birth mom had told us she was feeling a little bit different so I knew it would be anyday. I really didn’t want it to be on Christmas because I wanted him to have his own day. Plus we didn’t want to have to worry about all the Holiday traffic. 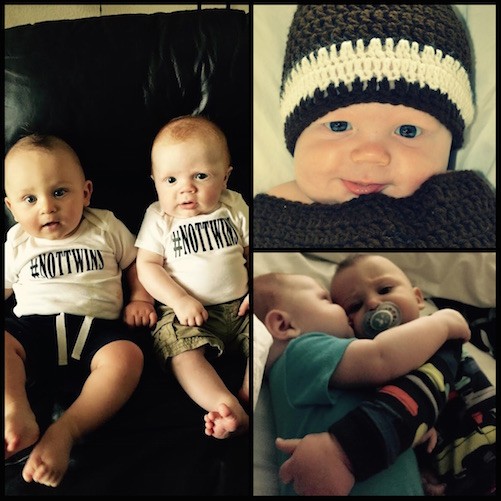 It was NYE and James and I had gone to dinner with my dad for his birthday and then had decided to hang out for a little bit over at my parents house. Around 9 o’clock we decided to go home and watch a movie. We made it about 10 minutes into that movie and fell right to sleep. At around 1:50, I get a phone call from our birth mom asking if I had received her text, which I had not. I was still so groggy from sleeping and kind of out of it. I jumped out of bed before she even told me what was going on. She said that thought she was in labor and that she would let me know. She was walking around outside and started having contractions so her grandma took her to the hospital and she was 4cm. So, we started packing up everything. I called my mom and told her to get over here because she was going to get Jaxon. My dad had to stay with Jaxon and my mom took James and I to the airport at 3:30 in the morning. The whole time praying like crazy that we would be able to get there in time for his birth. We jumped on the plane and got to AZ at 8:00 and she was at 8 cm, We figured it would be any time. The car rental place was taking forever so I told them.. UMM our birth mom is in labor and about to have our baby.. do you think you could hurry? He then hurried and got someone over so we could get to our baby. As soon as we got to the hospital we found our Birth moms room and met her family. She was still in labor and our little Landon wasn’t here yet. He waited to arrive when he wanted to. STINKER.. he wasn’t born until 2:15. He was perfect and I got to cut the cord. It was so cool being on the other side of things. They put Landon on his birth mom for a little bit so she could see him and then they took him to be weighed. They let me give him his bath and they checked him out. He was perfect with a full head of read hair. Looking back at this day we know God was with us in ever aspect of this journey. We got to have our own room with him to bond and get to know our little boy. The attorney said that this hospital was not adoption friendly so we were very worried. Well we had the most amazing nurses. They helped out so much, when it was time for us to take him home, our baby nurse had everything ready so that when the attorney got there all we had to do was sign off. It was like so easy. She even said I have never seen this go so well. Our birthmom walked out with us and we headed to the place where we were staying, The people we were staying with ended up being the nicest people you could have ever imagined. They were amazing. They adopted Landon as their Grandson since they only have granddaughters. 5 days later we got the call that we were good to go home. It was awesome because they had told us it would take two weeks and it took 5 days!!!! God was with us in every aspect of our journey. I know this was Gods plans all along.