If you were asked to define “family”, how would you answer? A mom, dad and their children? Two dads or two moms? A single mom? According to a 2016 United States Census Bureau report, 31% of American families do not consist of the “traditional” two parent household. Of those nontraditional households, 23% are children living with a single mother. Even though the demographic is relatively small, according to data obtained from The Williams Institute, roughly 1.4% of two parent households were made up of same sex couples, in 2016. 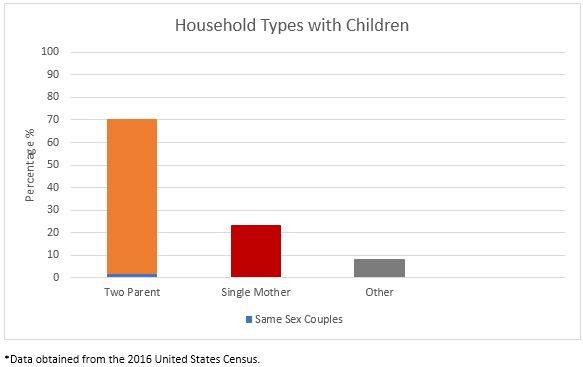 Simply put, many children biological or otherwise are raised in what would be considered nontraditional family structures.

More and more children are being adopted into these nontraditional households. Thirty years ago, adoption outside of an opposite sex, married couple household was almost unheard of. Today, because of great strides made in civil rights and gender equality, our ideas on who can and should adopt have dramatically changed. Some interesting statistics collected by the writers at Good Housekeeping may surprise you.

At Everlasting Adoptions, we believe a family is defined by LOVE and have successfully placed many single parent, same sex and multiracial families. In fact, 31% of our placements in the last 18 months have been with single mothers and same sex couples!