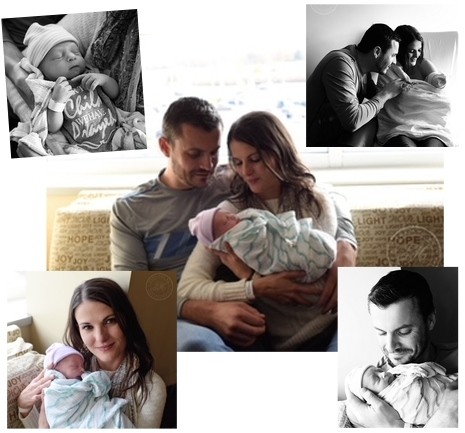 Brian and Sara rang in 2017 with the exciting decision to begin their adoption journey with Everlasting and boy oh boy will they be ending 2017 with a bang! When Brian and Sara received the news that birth mom Kelly was interested in getting to know them, the news was overwhelming and exciting at the same time! The first connection with a birth mom is always a bit overwhelming, but Everlasting guided them through their first contact and early communications. As the bond between the 3 grew, the excitement of baby’s impending arrival filled Sara and Brian with pure joy. While Kelly was scheduled for a C-Section mid November, Anderson had different plans! Kelly called Sara on November 3rd with the news that she was certain she was in labor. Brian and Sara packed up and took a red eye to Ohio. At 9:22 a.m. their lives changed forever. Waiting anxiously just a few rooms over, several minutes after being born, Anders met his mommy and daddy! While Brian and Sara were confident in Kelly’s decision, the 72 hours waiting for Kelly to sign her consents were long. This new family spent time together making sure that everyone felt supported. Just 4 days after going into labor, thanks to a speedy legal process, Brian and Sara were off on their new adventure as parents! Sara and Brian said that the connection with Kelly was divine and something they will treasure and cherish forever. We are all beyond blessed and hold dear to our hearts the confidence that Brian and Sara placed with us to build their family as well as the trust Kelly had in Everlasting to aid in her adoption plan. Congratulatulations, Brian, Sara & Anderson!