Andrew and Dalton signed on with Everlasting Adoptions in March of 2019. A little more than a year later they were connected with their birth mom and had to navigate how to build a relationship with her in the midst of a global pandemic. On July 29, 2020 their baby boy, Gavin James was born. Congratulations to Andrew and Dalton. We wish you health, happiness and a lifetime of love!

Adam and Brooke signed on with Everlasting Adoptions in August 2018 They had a few possible situations arise, but none were meant to be. They were anxious to be matched with a birth mother. In November 2019, one finally reached out, and luckily enough, she lived in Washington as well, only 40 miles away!

Adam, Brooke and birth mom, Bethany were extremely lucky in this unique situation to be able to go to doctor’s appointments together. They were also able to be there for the sonogram when they found out that a little boy was expected.

On March 5th, 2020, just as everything was shutting down due to the pandemic, Rhett Lehman was born at 10:08 am a healthy 7 lbs 15 oz. Adam and Brooke were able to meet him an hour after delivery.  Without ICPC, Rhett was able to come home just a day later to his birdie sister and cat brother.

Rhett loves snuggling, skyping with his grandparents and family and long naps with full bottles afterwards.  Adam and Brooke are still very close with Bethany. We can’t wait for him to explore his Pacific Northwest home the second the stay at home orders lift!

The past few months have been filled with lots of worry and uncertainty for the world. Through it all, we are still reminded of the beauty and blessings that surround us. Larry and Tonya received the biggest blessing imaginable when their son, Loren Michael was born!

Larry and Tonya joined Everlasting Adoptions in June 2019 and less than a year later on March 26, 2020, they took their baby boy home. Birth mother, Shaunna contacted Everlasting while she was in labor! She had chosen Larry and Tonya and when they received the call, they were truly speechless. They rushed to get to the hospital. Luckily, they were only a short 3 hour drive from the hospital and didn’t need to get on a plane. It was a true “stork drop”!

Shaunna labored hard, but had a healthy, 7lb 15oz baby boy the next morning. With a limited visitation policy in place, Shaunna was only allowed 1 visitor. Once their baby was in their arms; however, nothing else going on in the world mattered.

When they cleared ICPC, they headed home to settle into their new lives as parents together. The whole family was thrilled to welcome baby brother, Loren to the family. He is their beautiful blessing in the midst of a global pandemic. We wish everyone health and happiness in the days and years ahead.

Tina and Donny always wanted to be parents and share their love of life and adventure with a child of their own. When they signed on with Everlasting Adoptions in April 2017, they were embarking on their greatest adventure of all. At times, waiting to be connected with a birth mom was difficult. They tried to keep busy with work and travels, but they never lost sight of their desire to become parents.

As the end of their contract with Everlasting Adoptions was approaching, a birth mother reached out and wanted to be connected with them. Afterall, there is no clock on fate and no expiration on what is meant to be. They eagerly agreed to speak with birth mom, Taylor in April 2019. They spoke almost every day until they met face-to-face one month later. The visit went better than Tina and Donny could have imagined and they were even introduced to Taylor’s family. It was in that moment they established a lifelong bond that would facilitate Taylor’s open adoption plans.

Tina and Donny remained in close proximity to Taylor, staying in their RV toward the end of her pregnancy and good thing they did! Baby girl, Scarlett was eager to make her grand entrance and was almost born in the ambulance on the way to the hospital. Scarlett Shea Bailey was born on July 17th at 6lbs 11oz and 19.75 inches.

Taylor’s family welcomed Tina and Donny with open arms as they awaited ICPC clearance to bring Scarlett home. They even celebrated together at a BBQ.  Scarlett spent the first few weeks of life in their RV in true Tina and Donny fashion! Always an adventure! We wish you all the best of luck on this great adventure ahead.

Lindsey and Stephen joined the Everlasting Adoption’s family for a second time in August of 2017. They had adopted their son, Jacob with our help in 2015. With Jacob getting older and eager to be a big brother, Lindsey and Stephen decided they were ready to add to their family again through adoption.

Their wait seemed impossible and agonizing at times, but it was all worth it when they were presented with a baby girl who had already been born. After receiving that call, it was a mad dash to meet their beautiful daughter and take care of the technicalities.

When Lindsey and Stephen arrived at the hospital and met their little girl, it was like they had known her forever. Though this was a true “stork drop” adoption and they were unable to cultivate a relationship with the birth mother, they just knew it was meant to be.

When Jacob was finally able to meet his little sister, Emilia, it was love at first sight. Everlasting Adoptions had helped Lindsey and Stephen bring home not one, but two blessings and we couldn’t be happier. Thank you for trusting us to be by your side for this journey for a second time!

We are thrilled to share a very special New Year’s birth announcement welcoming baby boy, Camden Christopher! After a long journey, Kim and Chris were finally able to meet their son . On December 18, 2018, Camden was born at 8:32 am. 7.4lbs, 18 inches of pure joy. Though Kim and Chris’s adoption journey was long and difficult, the minute they were able to hold Camden in their arms, it was worth every second of the wait. We wish you all a Blessed and Happy New Year and a lifetime to come!

Maurisa & Glenn signed on with Everlasting Adoptions in August 2017 with the hopes of expanding their family through the miracle of adoption. In May 2018, they were matched with birth mother Kamil. Though Kamil was certain with her decision to choose adoption, she did her due diligence in choosing an adoptive family. She spent over a month getting to know a few prospective parents via text. In early May, Kamil knew in her heart that Maurisa & Glenn were the parents meant for her baby. Kamil revealed the exciting news to Maurisa on Mother’s Day, which will be a day she will never forget.

Maurisa, Glenn and Kamil had an opportunity to meet in person, which solidified the decision for Kamil. Kamil and Maurisa were lucky to have the next 5 months to form a strong bond and get to know one another even better. On October 18, 2018, Kamil gave birth to a beautiful and healthy baby girl, Kayleigha. Maurisa and Glenn’s long awaited for dream had finally became a reality. They were overjoyed as they held Kayleigha in their arms. We all will be forever grateful to Kamil for her selfless act of love. This Christmas will surely be blessed for Maurisa, Glenn and their families! 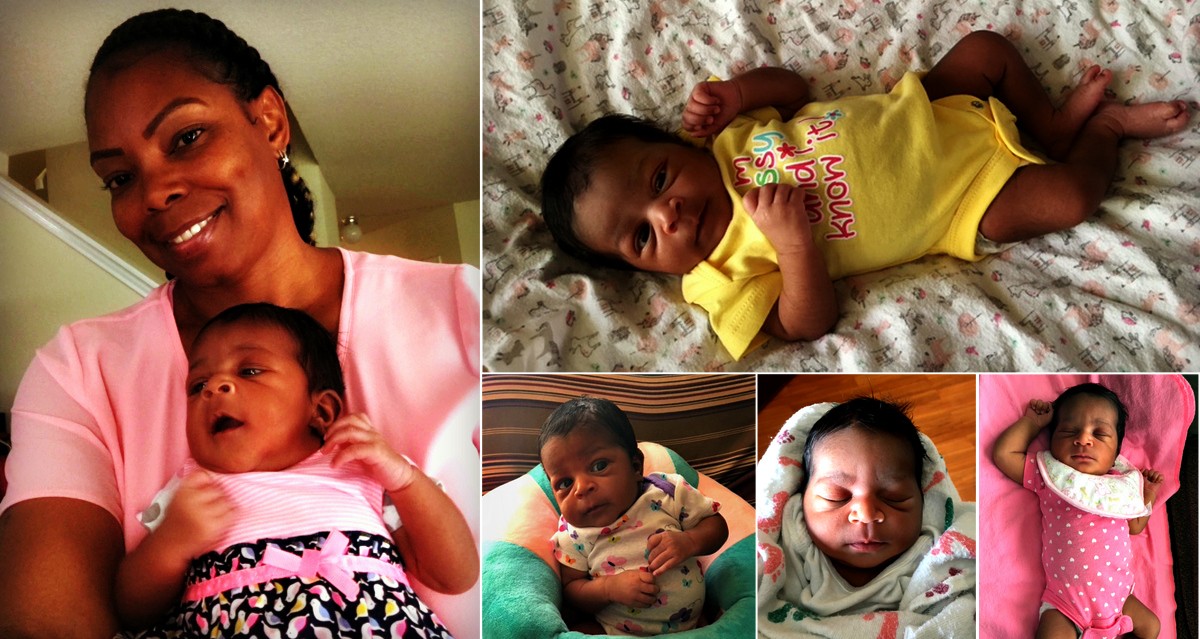 We are happy to announce another single parent placement that only took 10 months! Tracey joined the Everlasting Adoptions family in July 2017. Nine months later, on April 13, 2018, Tracey learned that there was a birthmother interested in her! After a few weeks of communicating with each other, Tracey was on her way to visit her birth mom, face-to-face. The visit went well; birth mother told her she wanted to move forward with her adoption plan and that she might deliver baby via cesarean as soon as June 4th. Wow! Awesome news for all and well worth the visit.

Tracey got a call on May 29th that Amanda was going to the hospital, right then, for a cesarean delivery. Tracey quickly took off to the hospital, so she could be there when baby was born. Luckily, Tracey lives in the same state as her birth mother. As we know, the adoption journey can be full of unexpected happenings. This was one of them and it turned out to be a false alarm!  Everyone went back home and waited for baby to make her earthly entrance.

Baby Nyla came two days later. She was born on May 31, 2018, and weighed 6 lbs 13 oz.  She is the sweetest baby who loves to be held and enjoys kisses on her cheeks. Tracey is ecstatic to welcome Nyla to her family. She looks forward to the two of them making lifelong memories and sharing unending happiness. We are also so grateful to Nyla’s birthmother for her selfless act of love. We wish you all the best of what is ahead! 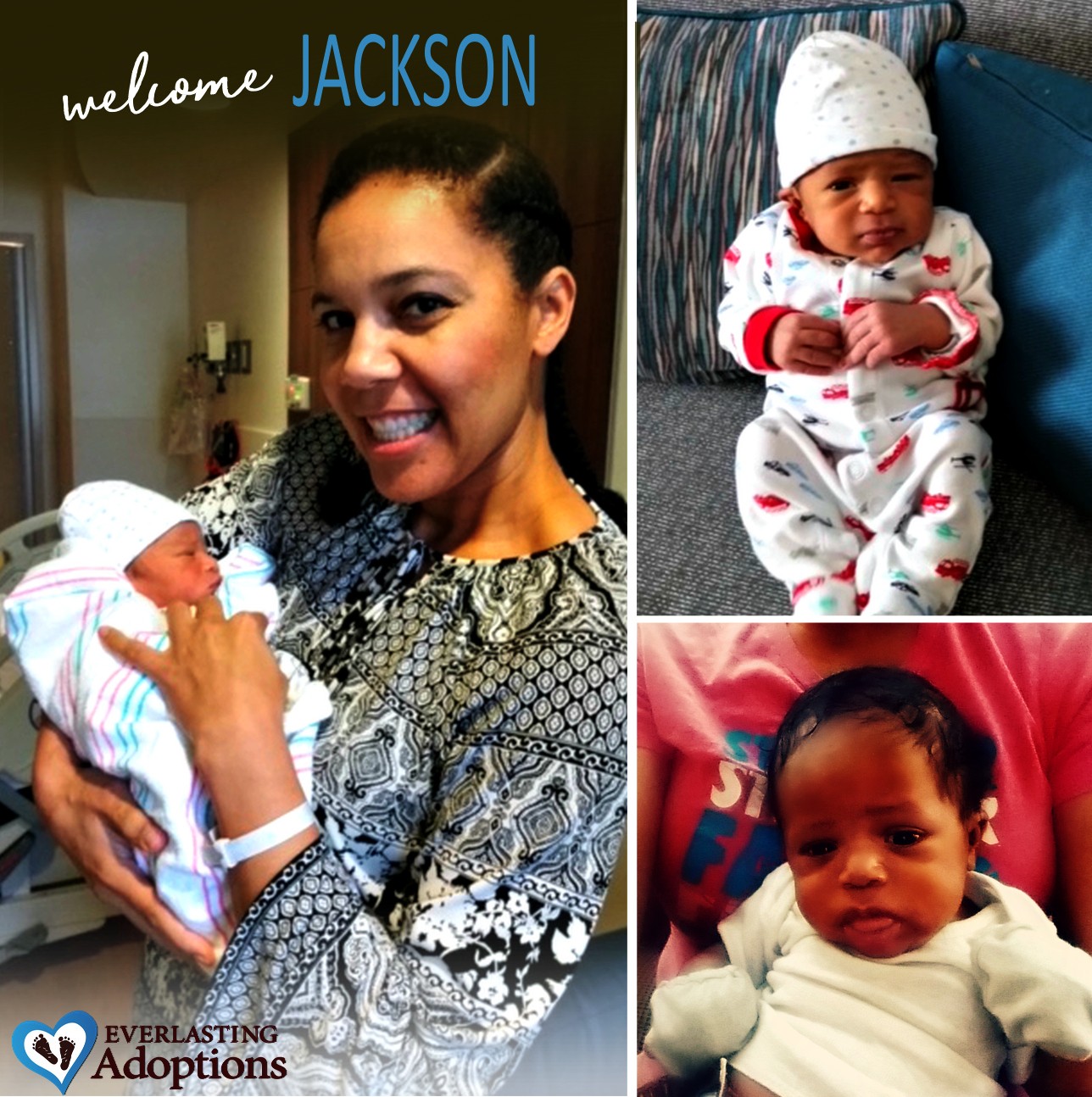 In August of 2017, Renee made the decision to pursue adoption for a 2nd time through Everlasting Adoptions. We absolutely love when we can help build families through the miracle of adoption more than once with returning parents!! Just 10 months after joining us for the 2nd time, on June 21, 2017, Renee was informed about a birthmother interested in learning more about her.

Since Renee was no stranger to the adoption process, she immediately started to develop a relationship with her birthmother, and her birthmother’s family members. It was a bit shaky in the beginning, as a lot of these situations can be, but on July 27, 2018, Renee became the mother to her second child, baby boy, Jackson.  He was welcomed home with open arms only 11 months after Renee joined Everlasting again.  We are grateful to have been able to offer her support and guidance throughout her adoption journey.

We wish Renee, Jackson, and big sister, Isabella the best of luck. 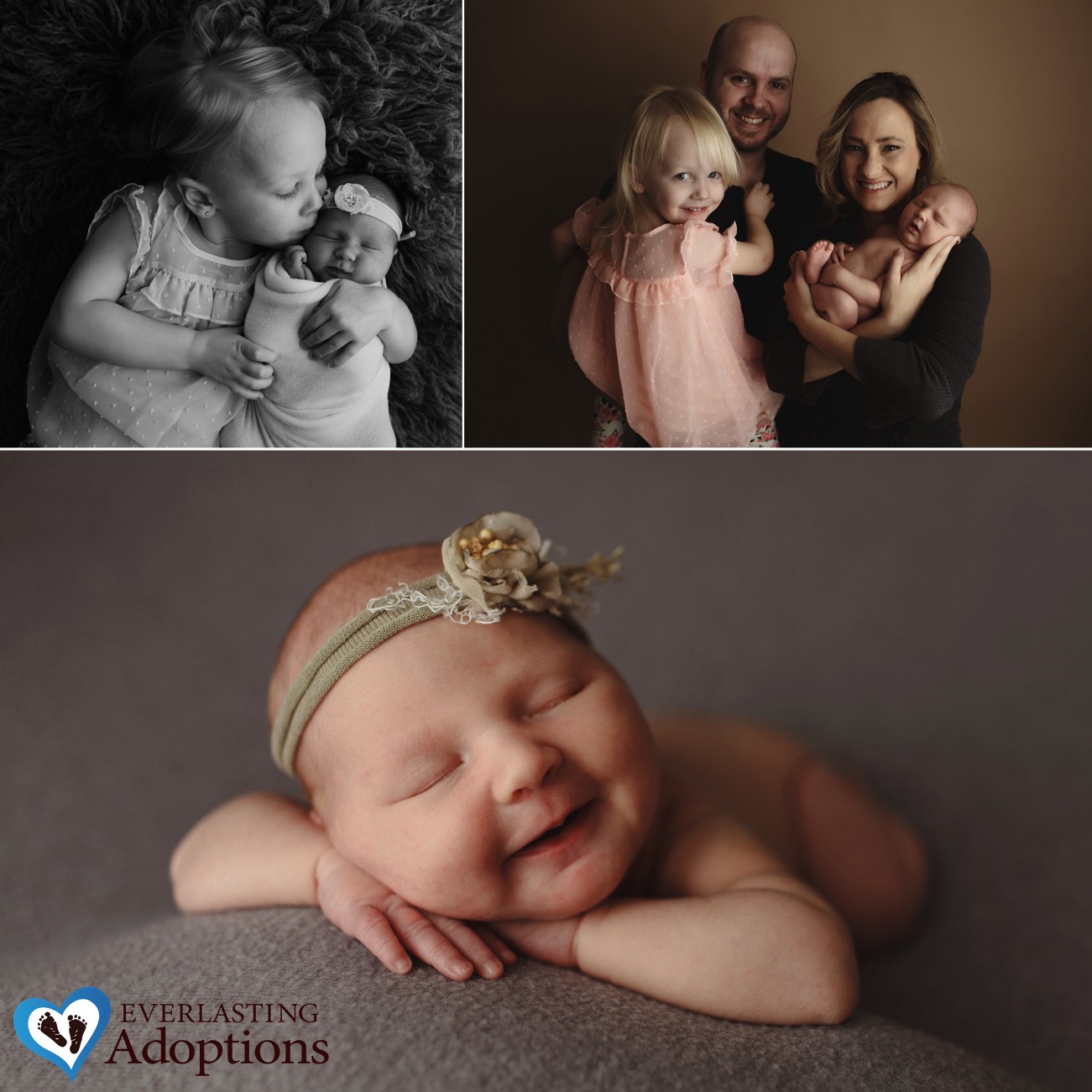 Gennifer and William chose to work with Everlasting Adoptions for a 2nd time, after we helped place them in only 7 months with their daughter, Atalie back in 2015. We were thrilled to welcome them back and help them through their adoption journey again. What a short journey that ended up being, when they brought home another baby girl in only 4 months!

Beautiful, baby girl Avalyn Elise was born on February 25, 2018 at 10:42pm weighing 7.4 pounds and 19.5 inches long. It was truly a whirlwind of events to welcome Avalyn to their family. Atalie is a doting big sister and is so excited to have a sibling. We are forever grateful to birth mother, Hayley and her selfless act of love. Congratulations to your beautiful and blessed family!